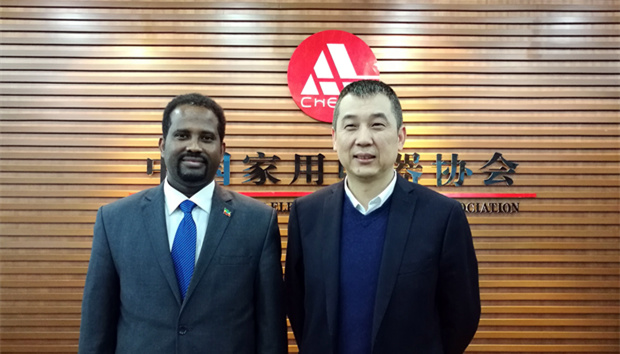 Negus Kebede Kassaw, minister counselor of embassy of Ethiopia, visited China Household Electrical Appliances Association (CHEAA)’s office on December 22, 2016, alongside Tony Zhang, business coordinator of embassy of Ethiopia. Xu Dongsheng, vice president of CHEAA, and Liu Zhao, director of Department of Membership Affairs under CHEAA, received them with warm welcome. Both sides shared their preliminary opinions on the investment environment of Ethiopia, benefits that investments could bring, and potentials that China’s home appliances enterprises could deliver there.

Negus pointed out that, Ethiopia was a great land for investments, with not only its fast growing economy and political stability, but more importantly, low cost of labor, water, and electricity, and great market potential. As the fastest growing economy of non-oil-producing countries in Africa, Ethiopia secured a 10.9% GDP on average from 2004 to 2015. Ethiopian government has been committed to education and job creation, which, as a result, raises the proportion of young people with high education, and boost domestic demand for products that improve life quality. Thanks to its political and social stability, the Africa Union and U.N. Economic Commission for Africa both set their headquarters in Addis Ababa, the headquarter of Ethiopia. To reach its goal of being a middle-income country by 2015, Ethiopia government offers a wide array of favorable policies for foreign investors.

According to Negus, Ethiopian residents have an increased demand for basic home appliances such as TV, refrigerators, washers, electric stoves and more, fueled by its rising economy, improved education, and popularity of electricity. And what’s more, Ethiopia’s heavily dependence on home appliance imports makes Ethiopia a better investment choice. Chinese home appliances to invest in Ethiopia could help them transfer their excess production capacity, and meanwhile, drive Ethiopia’s development.

Xu introduced the global expansion of CHEAA’s members including Hair, Midea, and Hisense in the past 2016, and invited the embassy of Ethiopia to be part of CHEAA-hosted Appliances & electronics World Expo 2017, AWE for short, as a way of getting to know China’s home appliance industry closely.

Through this meeting, both sides have a better understanding of each other, and this lays a solid ground for their further communications down the road.